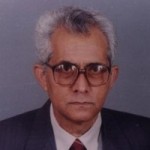 Prof. Ved Prakash Sandlas Passed away on July, 06 – 2017. He retired from regular Govt. service in Feb 2005 after working in ISRO (1967-1986) and DRDO (1986-2005) in the areas of Electronics & Communications, Satellite Launch Vehicles and R&D Management. Subsequently (during 2008-13) he functioned as the founder Director General, Amity Institute of Space Science and Technology, and Amity Institute of Aerospace Engineering, Noida.

He was designated Distinguished Scientist and appointed as Chief Controller R & D, DRDO during 1996-2005. As Director, Defence Electronics Applications Laboratory (DEAL), Dehradun (1986-96) he was responsible for the introduction of satellite communication era in the defence services. Earlier, he worked at the Vikram Sarabhai Space Centre (VSSC), Trivandrum and grew up to become Group Director, Electronics (1984-86) and, Mission Director/Project Director SLV-3 (1980-84), and was responsible for the two successful launchings of SLV-3 and Rohini Satellites on May 31, 1981 and April 17, 1983.